Discussion of current events and participation in intelligent conversation with other Fanmail.biz users.
New Fanmail.biz Users: Introduce Yourself Here!

Due to recent requests I have set up this thread to acknowledge the passing of celebrities who have made a difference in the world of show business / sports / film / stage etc.

Please feel free to post details of celebs who have recently passed, together with your photographs and past successes if you wish to.

"Desmond was the first legend, believe it or not. When he released Israelites nobody had heard of Bob Marley - he paved the way for all of them."

Let's hope we don't have to add any more too soon

Billy Preston died Tuesday May 6, 2006 at age 59. He was the keyboardist who had hit singles that included "Outta Space" and "Nothing From Nothing."
Top

I know this was a long time ago River Phoenix died...but I still think that he should be remembered. 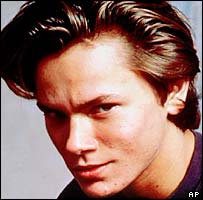 Phoenix managed to walk the fine line between respected actor and Hollywood heart-throb, ensuring the news of death was met with stunned disbelief by millions.

He died of a drugs overdose outside Johnny Depp's Los Angeles club the Viper Rooms, and the global headlines he hit ensured Phoenix's place in the pantheon of movie legends who died young.

The only indicator of how far his star could have shone comes from his contemporaries such as Keanu Reeves, Christian Slater and Depp, all still A-list movies stars commanding mega bucks.

A few minutes before 1am (Halloween morning), River had been in the bathroom doing
drugs with some drug dealer friends and someone offered him a snort of high-grade Persian Brown.
He was told it would make him feel fabulous.
As soon as he snorted it he started trembling and shaking in front of the sink,
screamed at his friend and then vomited.
Someone tried to help by splashing cold water on his face and then gave him a Valium.
(Nothing helps someone O.D.ing then to give them more drugs.)
He staggered back into the bar and over to actress Samantha Mathis and his sister Rain.
He complained he could not breathe and briefly passed out.
When he came to, he asked Mathis to take him outside.
Mathis first called River's friend and assistant Abby, then Mathis and River's brother Joaquin took him outside.
River then collapsed on the sidewalk.

After that he started going into seizures and had three before a photographer,Ron Davis,
went to call 911 at the nearby payphone, and so did Joaquin.
"He looked like a fish out of water," said Ron Davis, who was standing outside the club.
He was "thrashing spasmodically, his head flopping from side to side, arms flailing wildly" .
Rain had since come out and thrown herself on River to attempt to stop the seizures.
It seems after 8 minutes of seizures they stopped and River was still.
At which point Joaquin said he was not breathing.
At 1:14 a.m. he was in cardiac arrest when paramedics arrived and Paramedic ,
Ray Ribar of the LA County Fire Department began to administer CPR.
They rushed him to Cedars Sinai Medical Center where they arrived at 1:34.
When they got there, his skin was dark blue, but his body was still warm.
The ER physicians did everything to revive him, even inserting a pacemaker.
He was pronounced dead at 1:51 am.

River was placed in a blue coffin, and on November 4,
sixty mourners showed up at Milam Funeral Home for the viewing.
His usual blonde hair was dyed black for the film he was working on.

He was dressed in a black t-shirt with the logo of his band,
Aleka's Attic on it. His mother put a single carnation in the coffin.
As mourners passed the coffin, several placed things like notes and necklaces in the casket.

River was cremated, and his ashes were scattered over the family ranch, in Florida.
There was a memorial service held on the Paramount Lot on November 18th.
Sidney Poitier, Rob Reiner, Richard Benjamin, John Boorman, Christine Lahti,
Peter Bogdanovich and River's mother, Heart, attended it. Gerard Butler = The Next Bond

Eddie Guerrero... He passed away this year, it is a terrible loss for all the wrestling world... He was only 38 years old...

John Tenta... He passed away last week... He was fighting with cancer, and lost... His nickname was Earthquake, he was 42 years old...

Over 2000 successes!
And about a half for the charity too!

Edward J. Yates, who directed "American Bandstand" for 17 years, from a fledgling local TV show to a national institution that made Dick Clark a star, has died at age 87.

He died Friday at Fair Oaks nursing home in Media, where he had been for two months, Donohue Funeral Home said in a statement.

In October 1952, Yates volunteered to direct "Bandstand," a new show on Philadelphia's WFIL-TV. The show, featuring local teens dancing to the latest hits, debuted with Bob Horn as announcer and took off after Dick Clark, already a radio veteran at age 26, took over in 1956.

It was broadcast live in its early years, even after it became part of the ABC network's weekday afternoon lineup in 1957 as "American Bandstand." Yates pulled records, directed the cameras, queued the commercials and communicated with Clark.


"Ed was an extraordinary director. ... He managed to grab every exciting moment on 'American Bandstand,'" Clark told The Philadelphia Inquirer in a telephone interview Monday. "The pictures he created influenced a whole generation of young people across America."

As the show became a national hit, Clark became a household name and the mostly working-class teens who were regulars on the show were bombarded with fan mail.

Fans jammed the sidewalks outside the West Philadelphia studio to win a spot in the bleachers. Once inside, they hoped to catch the eye of a regular and get to dance on the show.

In 1964, Clark moved the show to Los Angeles, taking Yates with him.

Yates retired from "American Bandstand" in 1969, and moved his family to West Chester in the Philadelphia suburbs.

Yates became a still photographer after graduating from high school in 1936. After serving in World War II, he got a job as a boom operator at WFIL. He was later promoted to cameraman and earned a bachelor's degree in communications in 1950 from the University of Pennsylvania.
Top